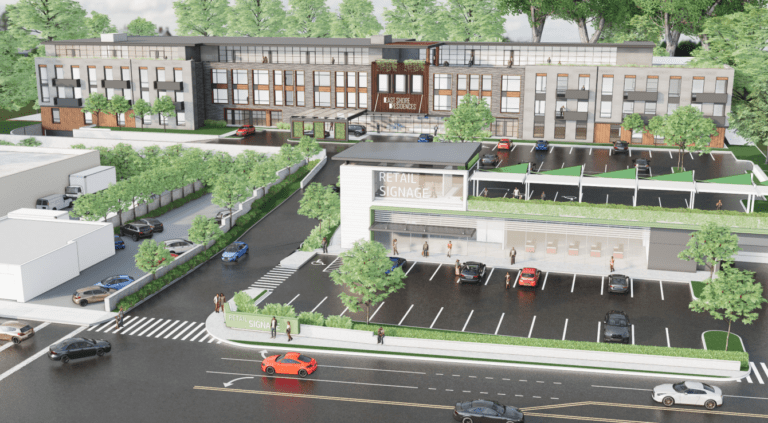 Plans for a 55+ year-old apartment complex on East Shore Road were approved at the Great Neck Village Board meeting on December 21.

The proposal, presented at the previous meeting by Paul Bloom of Harras Bloom & Archer LLP and representatives from Mojo Stumer Associates, includes a three-story apartment-style building at 265 East Shore Road with an adjoining commercial section.

The building proposed by Villadom Corp. will include 63 apartments and 161 parking spaces that will be used by residents and retail customers. It was approved 4-0 in the absence of administrator Eli Kashi.

After the site plan and architectural plan were initially presented to the public at the previous meeting, Joe Yacobellis of Bloom and Mojo Stumer proposed a number of amendments at last week’s meeting on behalf of Villadom Corp . and its CEO, Kris Torkan.

One of the changes to the original plan was a roof arrangement proposed to council. The building will only have three stories, so a recreational rooftop terrace is sought after. It has not yet been determined what types of recreational activities will take place on the rooftop terrace. However, once this is decided, the development team will come up with a proposal to the board.

After the presentation, several residents expressed their concerns about the project. A resident who lives near the proposed site has requested that trees be planted on one side of the building so that they do not obstruct the view from her home.

Bloom said his house was at a higher elevation than the building, so only the top of the complex would be visible from his residence. In addition, according to officials, there is no place to plant trees in this area.

Another resident has constantly asked about school-aged children residing in the apartment complex, with concerns about potential overcrowding at Great Neck public schools. It was later confirmed that the 55 and over residential complex can legally accommodate children.

Mayor Pedram Bral said that due to the age restriction, any influx of K-12 students into the Great Neck School District should not be that large.

“I also think that the amount of tax revenue would be significantly greater than the effect of students… and that would be a positive balance, not a negative,” he said.

A number of people were concerned about traffic and parking in this area. Parking and traffic on East Shore Road has been an issue for some time, and residents have said they believe this building will exacerbate the problem. Although it does provide additional parking, many have claimed that spaces will all be taken when people arrive for work.

The argument has been made that the 47 parking spaces reserved only for the commercial section will have a rapid turnover. In addition, a traffic study was carried out by VHB and the results did not confirm the circumstances mentioned.

“Unless we turn the whole area into a parking lot,” Bral said, “I don’t know how we could address the lack of parking that exists.”

The site where the residential building will be constructed was an 80-year active wastewater treatment plant before being decommissioned in 2014, according to the Department of Environmental Conservation. This could lead to potential contamination and health problems for those residing on the site.

However, Louis Massaro, the village’s public works superintendent, assured the community that “the village is doing everything correctly from an environmental point of view.”

Bral said that of all the options that could be presented as to what the village could do with the now vacant property, this proposal has the least impact on the environment and on the school district.

The council also unanimously approved various laws relating to the village zoning code. These approvals included correcting the list of authorized retail businesses in the Mixed Use (MU) neighborhood of Great Neck, rezoning part of the property that is currently part of the MU neighborhood to be in the residential neighborhood. Waterfront and give the board of directors the power to set an expiration date or terminate previously granted zoning zoning approval.